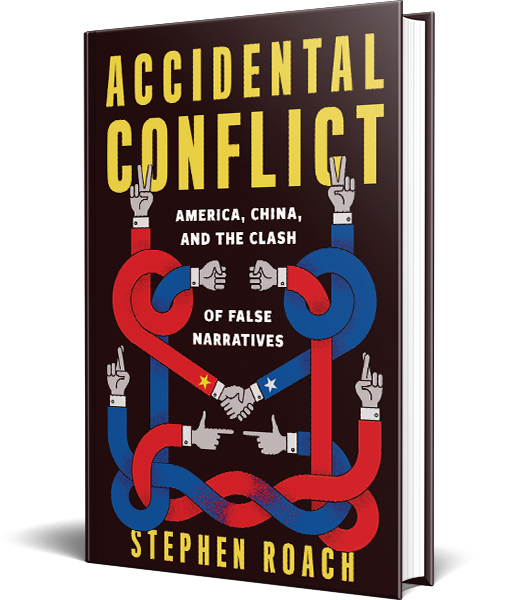 America, China, and the Clash of False Narratives

The US-China conflict is an accident that wouldn’t have happened were it not for the false narratives that both America and China have embraced toward each other. For the United States, a massive trade deficit with China is the scapegoat, even though it is an outgrowth of America’s own shortfall of saving.  For China, fears of containment by the United States are seen as an existential threat to its aspirations of prosperity, deflecting focus away from a consumer-led transformation of its economy.

America and China share one critical inclination: it is far easier to blame the other than to accept responsibility for their own shortcomings.  This blame became the high-octane fuel of conflict. Over the short span of just four years, 2018 to 2021, America and China have entered a trade war, a tech war, and now the early skirmishes of a new Cold War.

In a hard-hitting analysis of America and China’s economies, politics, and policies, Roach posits that the false narratives on both sides, amplified by information distortion and social networks, are more a reflection of each nation’s exaggerated fears of the other than an honest self-assessment of problems of their own making.

Outlining the disastrous toll of conflict escalation between China and America, Accidental Conflict concludes with an innovative road map of conflict resolution that stands in sharp contrast to the failed approach that has taken the Sino-American clash to the breaking point. A new strategy is desperately needed—before it is too late.

“A remarkable book. Accidental Conflict offers a wealth of evidence about and a new depth of understanding of the underlying forces that drive the Chinese and United States economies.”
—Robert Shiller, Nobel laureate in economics and author of Narrative Economics: How Stories Go Viral and Drive Major Economic Events

“If you wonder how the US-China relationship has gone from friendly to hostile in a few years, this is the book for you. Accidental Conflict is the result of failing to turn a codependent relation into a interdependent one. It is an opportunity we should not miss.”
—Robert Engle, Nobel Laureate in Economics, 2003 and Co-Director of the Volatility and Risk Institute and Emeritus Professor of Finance at NYU Stern School of Business

“Accidental Conflict is a very important and timely book. Its arguments and analyses have the potential to change misperceptions by policymakers and analysts on both sides and avoid a dangerous and mutually destructive course.”
—Laura D. Tyson, former Chair, While House Council of Economic Advisers
“I can think of no one better qualified than Steve Roach to explain how the China-America bromance went wrong, and how it could, with good will on both sides, be put right.”
—Howard Davies, author of The Chancellors: Steering the British Economy in Crisis Times

My previous book, Unbalanced: The Codependency of America and China, ended with a warning that now seems painfully obvious. I feared the codependent economic relationship between America and China might go terribly wrong. Unfortunately, that is what happened. The open conflict now evident between the world’s two most powerful nations is the outgrowth of an inherently precarious codependency.

We should have seen it coming. Relationship conflict arises when there is a profound shift in the terms of engagement between two partners. When Unbalanced was published in 2014, the two nations were at a fork in the road. One path would be delineated by what I called an asymmetrical rebalancing—where one partner changed and the other didn’t. The other, more symmetrical path would be forged by the willingness of both partners to change. The asymmetrical path was a recipe for conflict. Symmetry would avoid conflict and allow each nation to meet its growth and geostrategic challenges in a collaborative spirit that bordered on harmony. The choice was theirs.

There is no dark secret as to what happened: China changed while America remained stuck in its ways. In part, this shift stemmed from China’s inevitable growth challenges. A spectacular takeoff of 10 percent annual economic growth from 1978 to 2007 took its economy to a critical threshold. With per capita income having risen more than tenfold over that period, China was rushing headlong toward the challenging zone of the “middle-income trap,” where setbacks are more the rule than the exception.

For China, this was a clarion signal to change. And that is exactly what it did. With prescient foresight, or serendipitous good fortune, China embarked on the road to rebalancing, shifting its sources of economic growth away from an increasingly unstable external sector toward internal private consumption and indigenous innovation. But the changes in China have gone far beyond economic rebalancing—there has also been an equally dramatic and worrisome tilt in its political economy of power and ideology. With the United States clinging to a timeworn growth model and increasingly consumed by social and political polarization, the die was cast: a destabilizing dynamic between the two nations has led to a full-blown trade and technology war.

This tilt in the relationship dynamic underscored the paradox of the Next China—that China’s emergence as a major engine of global economic growth turned into an uncomfortable ascendancy for established world powers. But it did more than that. It also unmasked the great American paradox of a savings-short global power that had long prospered well beyond its means. Conflict took on a life of its own, bringing an increasingly treacherous endgame into focus. Notwithstanding the darker warnings of history, the rising power was indeed clashing with the incumbent hegemon.

It didn’t have to go this way, and there is still a chance to avoid the worst-case outcome. The big question is whether both powerful nations have the vision and, ultimately, the political will to resolve this conflict before it is too late. As Henry Kissinger has put it, the United States and China are now in the “foothills” of a new cold war. Predictably, codependency has entered the danger zone of conflict escalation. For America and China, a new framework of engagement and coexistence is an increasingly urgent priority. And so we begin where Unbalanced left off.